Posted by FRACTIVIST at 09:07 No comments:

Participants Include Ed Begley Jr, Raphael Sbarge, Lee Allport, Marianna Nichols, Nichol Haskins, Jackie Pletsch, and The Mom Bloggers of ErieRising.com
(Los Angeles, CA August 21, 2012)- Bringing together the voices of actors and celebrities such as Ed Begley Jr. and Raphael Sbarge with bloggers and online influencers, BloggersInspiringChange.org and ErieRising.com have created a PSA to help educate the public on exactly what fracking is and how it can harm their communities.
“Fracking is a method of natural gas extraction that has the potential to poison our families. However, few people even know it’s happening, and that means there is something wrong with this situation,” said Lee Allport, Creator of BloggersInspiringChange.org.
"I'm so happy to be a part of the initiative," said Raphael Sbarge, an actor and founder of the environmental awareness organization Green Wish. "Fracking is of great concern to those of us in the environmentalmovement, so it's so wonderful to take part in a grassroots effort led by many of those most directly affected by the practice. These are the voices that need to be heard."
Beyond this PSA, BloggersInspiringChange.org and the various participants ask that viewers at home get involved in fighting fracking in their communities by writing to your elected officials or supporting organizations such as http://www.ecowatch.org.
The PSA can be viewed online here (LINK). For additional information on Bloggers Inspiring Change, please visithttp://www.

bloggersinspiringchange.org and to learn about how fracking has affected people by visitinghttp://www.erierising.com

Seeking to quell environmental concerns about the chemicals it shoots underground to extract oil and natural gas, Apache Corp. (APA) told shareholders in April that it disclosed information about “all the company’s U.S. hydraulic fracturing jobs” on a website last year.

Actually, Apache’s transparency was shot through with cracks. In Texas and Oklahoma, the company reported chemicals it used on only about half its fracked wells via FracFocus.org, a voluntary website that oil and gas companies helped design amid calls for mandatory disclosure.
Energy companies failed to list more than two out of every five fracked wells in eight U.S. states from April 11, 2011, when FracFocus began operating, through the end of last year, according to data compiled by Bloomberg. The gaps reveal shortcomings in the voluntary approach to transparency on the site, which has received funding from oil and gas trade groups and $1.5 million from the U.S. Department of Energy.
“FracFocus is just a fig leaf for the industry to be able to say they’re doing something in terms of disclosure,” said U.S. Representative Diana DeGette, a Colorado Democrat. DeGette, along with Pennsylvania Senator Robert Casey, introduced legislation in March 2011 that would require companies to disclose fracking chemicals. The bills haven’t advanced in either the House or Senate.
With FracFocus, “companies that want to disclose can do it but the other ones don’t have to,” DeGette said.

I analyzed fracfocus.org data against official docx and found a 75% skew in official COGCC data of that which was posted on fracfocus. It's bogus

fracfocus is nothing but a public pacifier.

Posted by FRACTIVIST at 11:41 No comments:

Bill Barrett Corp., a Denver-based oil and gas producer that operates wells in Weld County, reported Thursday net income of $3.3 million for the second quarter, down sharply from $32.6 million in profits in the previous second quarter.

Posted by FRACTIVIST at 14:49 No comments:


WASHINGTON D.C. – Over the past decade, the fossil fuel industry has mounted a coordinated campaign to discredit renewable energy and hinder its growth, according to a new report released today by the Sierra Club.

This misinformation campaign is currently evident in the struggle to renew the Production Tax Credit (PTC) for wind energy. The PTC helps support the more than 75,000 jobs in the wind industry, but if the tax credit is not renewed before the end of this year, as many as half those jobs could be lost.

"From California to Pennsylvania, clean energy jobs are under attack by fossil fuel interest groups – yet many in Congress are sitting on their hands while tens of thousands of American jobs hang in the balance," said Michael Brune, executive director of the Sierra Club. "It seems these members of Congress prefer serving the interests of the big polluters that bankrolled their campaigns over the interests of working families. That needs to end now. Congress must stand up for the tens of thousands of Americans whose jobs are on the line and renew the Production Tax Credit."

The Sierra Club’s report follows the trail of money from big polluters to politicians and non-profit front groups. For example, the oil and gas industry spent more than $146 million on lobbying alone in 2011, while Big Oil tycoons David and Charles Koch gave at least $85 million to 85 right-wing “think tanks” and advocacy groups over the past decade and a half. Meanwhile, organizations like the Manhattan Institute and the Heartland Institute that defend oil subsidies while attacking renewable energy have received upwards of $600,000 each since 1998 from the oil company Exxon.

Wind power is a clean, competitive energy source that has seen strong momentum over the past few years. Already, states like Iowa and South Dakota generate 20 percent of their electricity from wind power, and the wind industry is on track to produce 20 percent of America’s electricity by 2030. More than 400 American manufacturing plants build wind components, keeping jobs close to home.

To read the report Clean Energy Under Siege visit http://www.sierraclub.org/pressroom/downloads/SierraClub-CleanEnergyUnderSiege.pdf
###
Posted by FRACTIVIST at 13:36 No comments:

Fracking and Nature do not Mix [IMAGES]

Below are images from where I live in Colorado along the Rocky Mountains. You can see the absolute beauty behind the ugly heavy, toxic industry called oil and gas development. The Rockies have numerous peaks that reach over 14,000 feet and are admired by the rest of the world.

Each day, these Rocky Mountains are covered with a beautiful sunset, as immortalized in a song by John Denver. The beauty we call, Colorado, is now blocked and ravaged by fracking rigs that rip up our soils, contaminate ground and surface waters, spew chemicals in the air such as:trimethylbenzene that impairs your respiratory system, causes brain and nerve disorders, affects your immune system, causes cancer and tumors, affects your genetic makeup, is considered an endocrine disruptor and causes liver and kidney failure. Other chemical found are acetaldehyde, acetone,cyclohexane, formaldehyde, fluorene and hundreds of other very harmful chemicals.

The oil and gas industry is imposing severe, and catastrophic damage to our environment and 'your' health on a scale that will ultimately be grave when all is said and done. It's already shocking to me as I uncover the truth about oil and gas in Colorado. I have over 75 active oil and gas wells within a one mile radius of my home and cannot wait to move out of this forsaken 'Superfund' County.

I have uncovered many things in Colorado and the State appears to be negligent in its address to the safety and concerns of its citizens. I call upon the State of Colorado to fully address the harmful impacts the oil and gas industry is imposing on the environment and its citizens with a full health impact study. (I will submit an official letter to this statement).


Colorado citizens are being invaded by oil and gas development at an alarming rate. We currently have ~47,000 active wells and are set to more than double that number in the near future. One County, namely Weld County, or 'Well County' as I call it, comprises ~40% of the states active well count with 18,000 active wells as you can see in the image at the top right of this blog page.

In Weld County, our Laramie-Fox Hills Aquifer was confirmed by the COGCC in Aug of 2009 with thermogenic methane and toluene oil and gas development. Yes, this aquifer was contaminated by mining that uses fracking methods and where in the hell is the EPA? The operator who reportedly contaminated the aquifer was fined a mere $46,200. LINK

Further investigation appears to show that this aquifer has and continues to be contaminated with thermogenic methane and toluene over the last three decades by oil and gas mining. I find it shocking that our own County Commissioners even state there are no public complaints on record that stem from oil and gas development in Weld County.  That's a blatant lie, and one that requires these officials either be removed from their positions for being ineffective and not addressing the real safety concerns of its citizens, or submit a public apology to the current 642 citizen complaints  and admittance of lack of due diligence immediately.

What was once a beautiful Rocky Mountain view is now, forever marred by the sick industry that uses harmful, unregulated, unconventional methods to extract a mineral far less valuable than that which we need to survive. Make no mistake, this unregulated industry is causing far more harm than any 'positive' benefit they purport. Thus the much needed federal exemptions LINK

The State of Colorado has failed miserably to prevent and mitigate adverse impacts to the environment and human health. 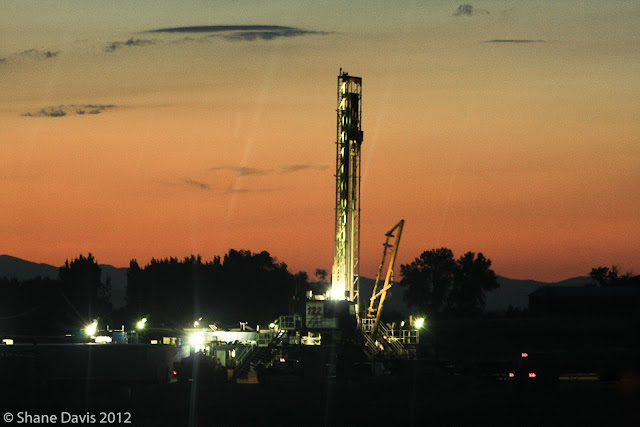 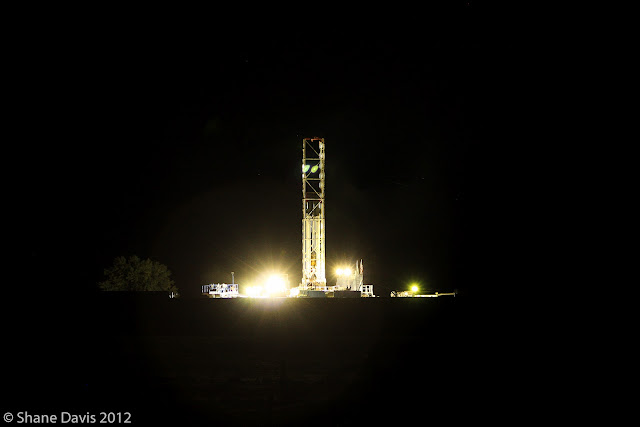 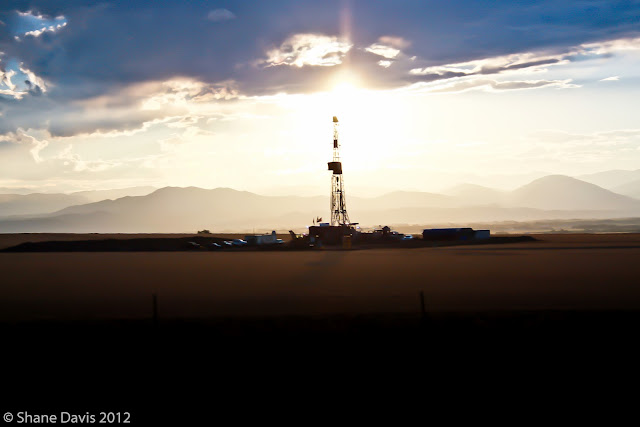