Dear Governor Jerry Brown: Will you Deny the Citizens of California their Civil Rights to Safety?

With 2,139 oil and gas wells already fracked, will California repeat the same mistakes of the past and let a largely unregulated industry invade? Will you frack to the moon and back, or will your ‘Moonbeam’ shine a new light on harmful fracking and ban it outright in California?  Governor Brown, your environmental legacy could easily be erased by allowing fracking in California to continue. Will you have the courage to be a national leader and ban fracking altogether or will you be swayed by the multi-national ‘OILigarchy’ to destroy California’s water, soil and air for offshore profits of the few?

REWIND: Since the late 1890’s prospectors have been in search of oil deposits spanning nearly every square inch of Los Angeles County.  Oil was finally discovered at a depth of 460 feet using a makeshift drill carved from a 60 foot eucalyptus tree. WildcatterS swarmed to Los Angeles looking for land to lease and wells to drill anywhere they could find with hopes of striking it rich. 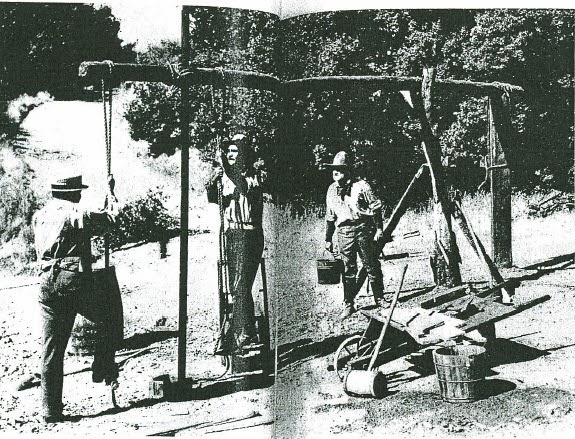 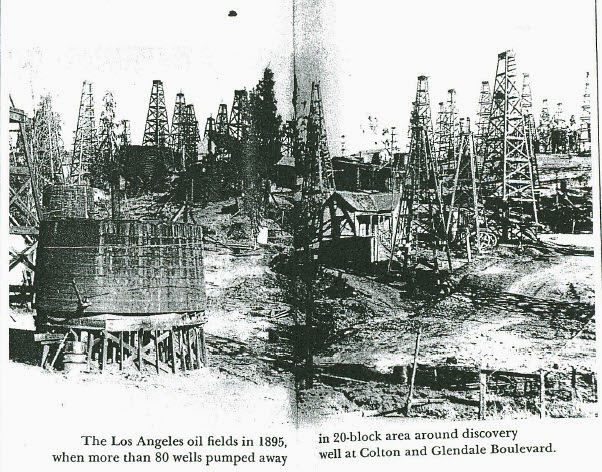 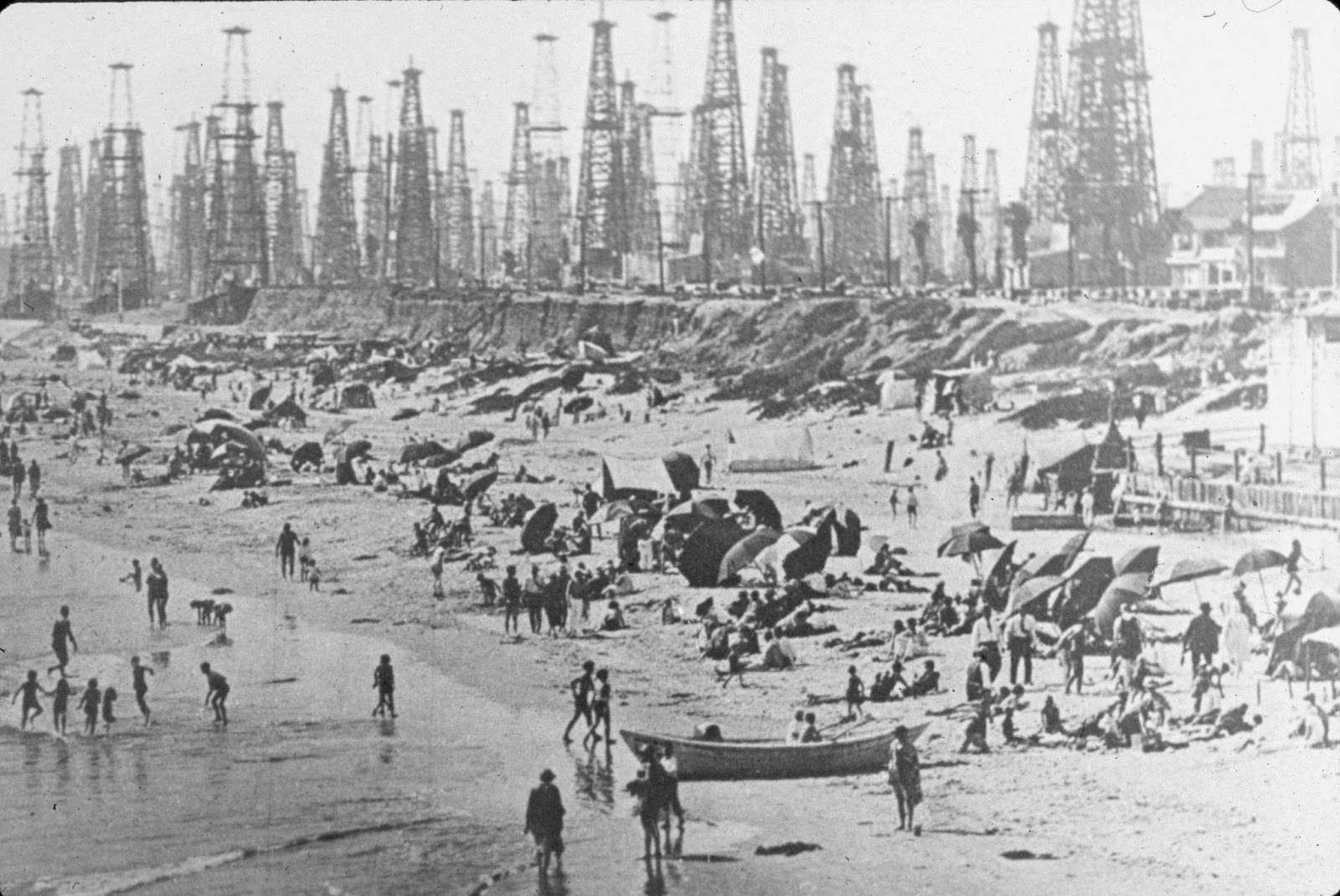 In 1906 a few of the wealthiest prospectors who dominated the Los Angeles oil field thought the local ranch-lands that grew beans as a major cash-crop had  vast oil plays under them. They were wrong. There was no oil to be found, so the men quickly ripped out the farmland to create a section of land into a ‘classy subdivision’ called Beverly Hills. Before they sold a single lot in Beverly Hills, they added restrictive covenants to every deed forbidding any oil exploration or oil wells on the property. That protection was essential for any respectable neighborhood, because the oil boom had ruined one street after another in Los Angeles.  Entire neighborhoods had vanished under the forest of wooden derricks and a grimy film of oil, and the roar of the escaping natural gas and the ump-um ump- um of the pumps never ceased.

The horse-drawn wagons that carried heavy drilling equipment and pipe tore up city streets. And the blocks off Santa Monica near Vermont  Avenue had become a raucous oil workers shantytown. The saloons were busy 24 hours a day. Prostitutes often plied their trade from temporary shelters made from canvass stretched over wooden poles. Gamblers worked out of two room shacks, with a pool table and tobacco counter in the front with pinball machines, card games and a quick exit in the back. These abuses flourished because the city hesitated to clamp down on the oil industry.1 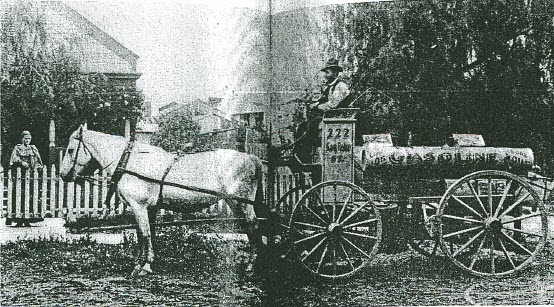 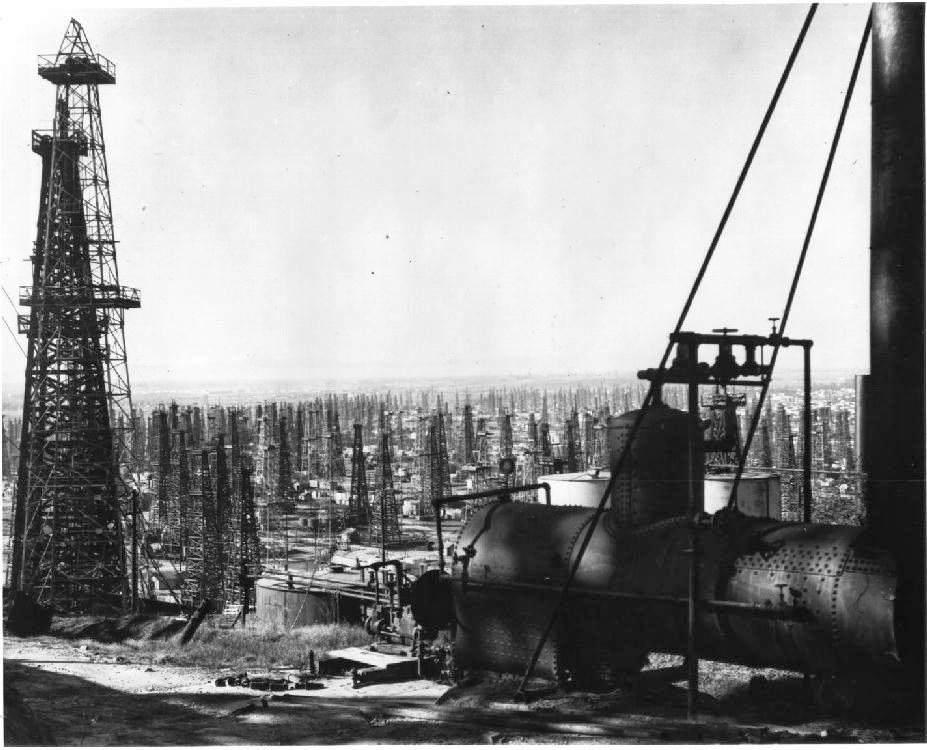 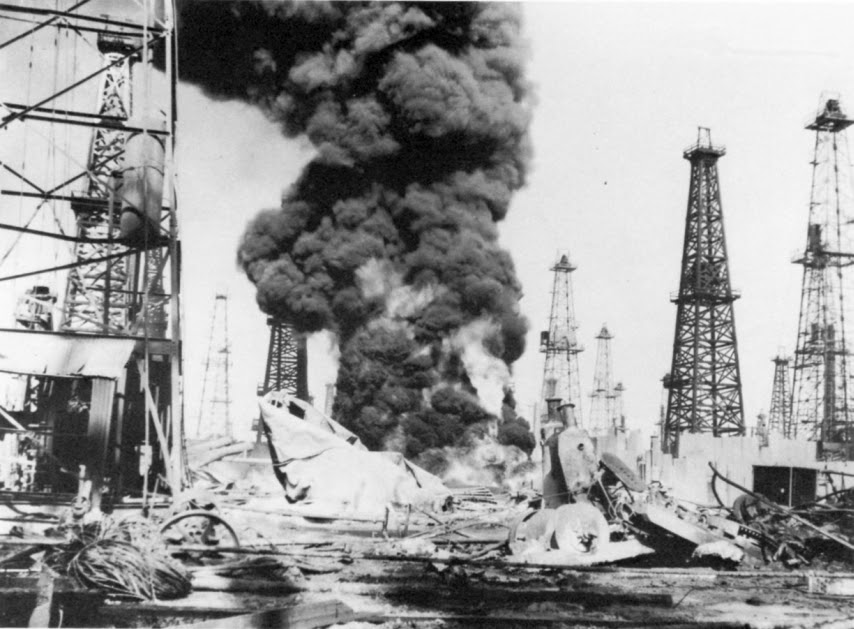 Fast-forward to 2014 where the Los Angeles City Council in a 10-0 vote, unanimously enacted the first moratorium on fracking in California. California currently has approximately 2,139 oil and gas wells that have been fracked with tens, if not, a hundred thousand more to come. The majority of the wells are horizontally fracked in the central valley which is considered the Unites States largest agricultural lands providing more than 50 percent of all the nations produce and 95 percent of the almond market. 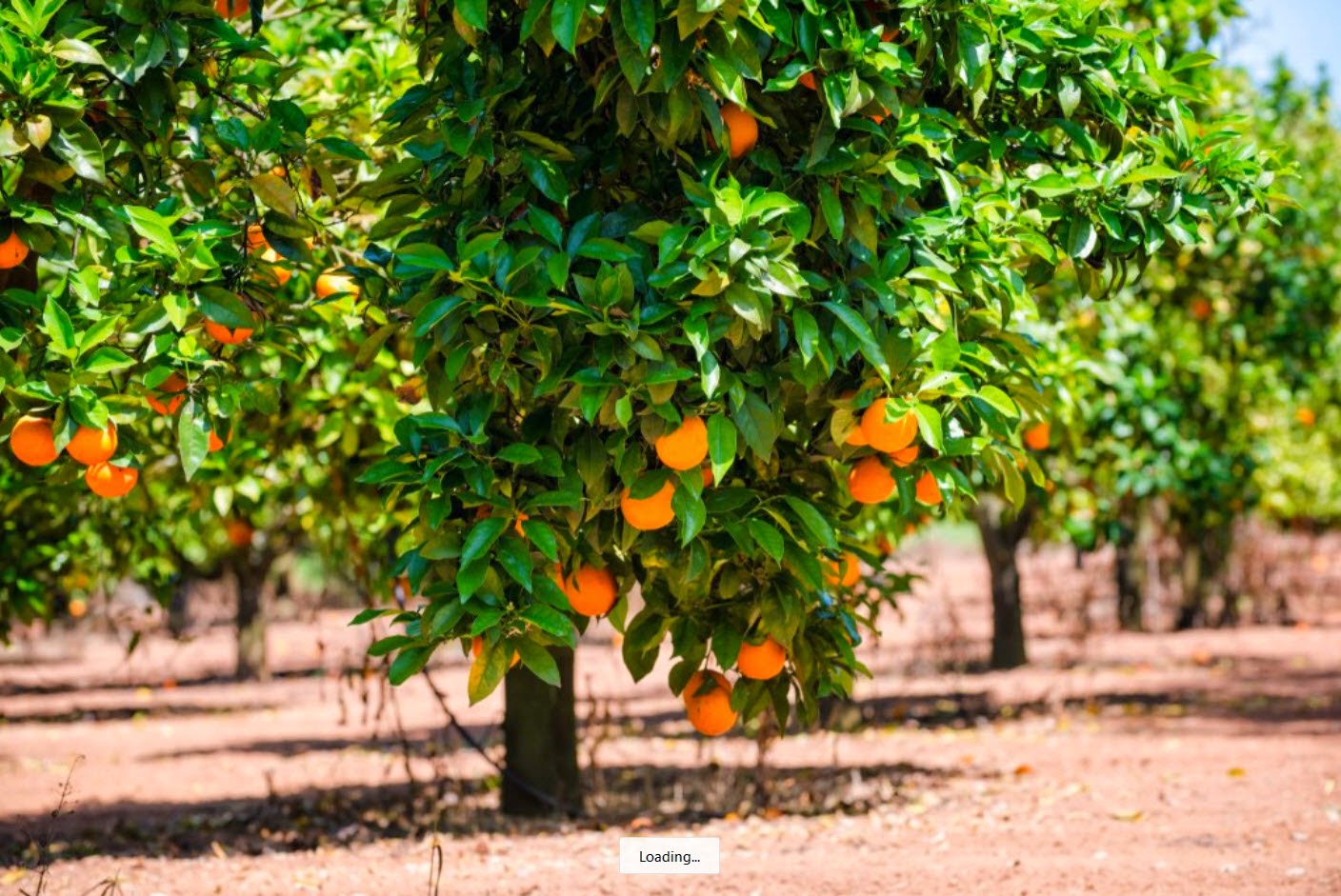 It is no secret California is currently experiencing a water drought of epic proportions that has all farmers on edge wondering if they’ll have enough for their crops.  I spent nearly two weeks in California on a speaking  tour driving from city to city and saw large signs that riddled the highways and interstates with statements that read: ‘NO WATER = NO JOBS.’ The drought is so bad that some farmers are pulling out their crops, religious believers are praying for rain and local governments are ordering restaurants to stop serving glasses of water except to those patrons who request it.3 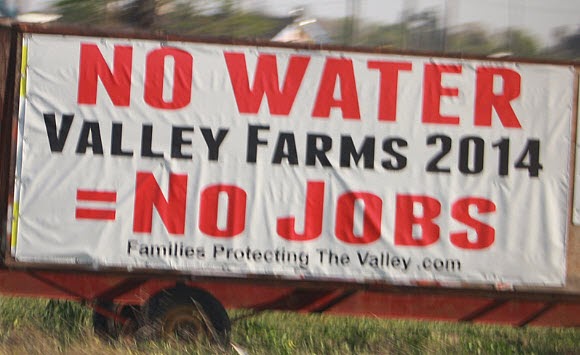 Have California officials lost their minds by allowing the oil and gas industry to use such a valuable resource as water to mine for a far less valuable fossil fuel? Who has the lack of responsibility to allow such a non-beneficial use of water and remove it from future generations?

We know agriculture uses vast amounts of water for crops and ranching purposes, but the water used is a ‘beneficial’ use where the water goes back into the hydrological cycle to be used again and again. The oil and gas industry’s use of potable water should immediately be banned.  No amounts of fossil fuels are worth destroying our water supply that ultimately harms the environment and our future.

Governor Brown, will you call for California as a whole, to have restrictive covenants forbidding harmful fracking as the city council did in the early 1900’s for Beverly Hills? Or will you give up California to the oil and gas industry?

Please allow me to shed some light on my experience with fracking Governor Brown; In Colorado where I live, we currently have over 52,000 active high pressure slick water fracking wells and more than 22,000 in my county alone, with approximately 75 wells within a one mile radius of my home. I conducted an investigative study using un-redacted, official COGCC spill/release reports and found that 43 percent of all oil and gas related spills resulted in ground water contamination with chemicals like benzene, toluene, xylene, ethyl-benzene and many more in Weld County, Colorado.4  My study was also confirmed as accurate by the Colorado Oil and Gas Conservation Commission in 2013.

I have since moved from this industrial wasteland and still cannot escape the oil and gas invasion as it is on a hell-bent mission to acquire every last molecule of methane and oil from the earth and transport it via train to seaside terminals to ship to other countries. What form of ‘patriotic exportation” is this? 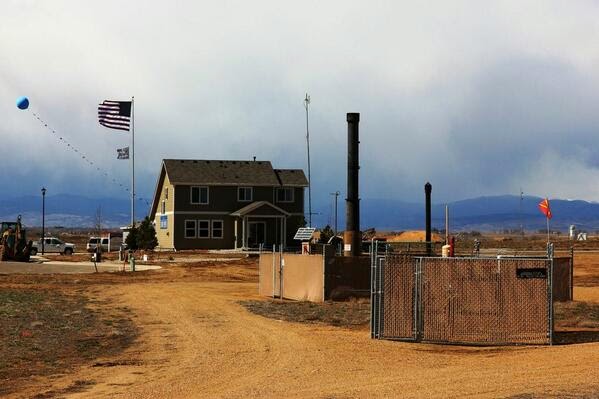 Colorado’s largest aquifer was also contaminated by thermogenic methane and toluene in 2009. The aquifer was never cleaned, the oil and gas operator was fined $46,200 and the public was never informed by the state about this atrocity .5

Citizens drank benzene contaminated water, people’s homes have abandoned oil and gas wells in their back yards and they do not know about them, homes have been built on top of abandoned wells which leaked gases that subsequently exploded and sent the occupants to the burn center. Billions and billions of gallons of toxic, endocrine disrupting chemicals have been discharged in Colorado’s rivers, lands and airways for years with no end in sight all brought to us by the oil and gas industry supported and promoted by our own Governor John Hickenlooper.

Recent air chemistry studies conducted by The Endocrine Disruption Exchange  illustrate the different  types of chemicals found in the air near oil and gas operations and appear to cause long term negative physical affects to those who live near active oil and gas wells.6

There is no time to wait Governor Brown; you must call for a fracking ban in California immediately to prevent the human and ecological catastrophes that are imminent from the largely unregulated extractive industry that has grossly misinformed the American people. The industry has lied to officials, lied to the public and it also appears they have falsified documents to misinform the public that fracking is safe. It is not. This misinformation is reckless and morally wrong.

Imagine protecting the safety and welfare of the citizens, the economic infrastructure, the environment and truly protecting a viable future for California as a whole.  Your decision to ban fracking would be a positive ripple across the globe asserting a proactive approach to an industry that has not been proven safe, and in fact, this industry can never be made safe. Only you can make it safe by not allowing it to continue.

As you know, over 4,000 people recently encircled the State Capitol in protest of fracking in California. The advocates for a ban include, but are not limited to; farmers, ranchers, nurses, geologists, medical doctors, professors, local business men and women, mothers, teachers, fishermen, hikers, wine makers, native tribes, hydrologists, military veterans and so many more. Their voices rang loud and clear that they are speaking for the greater good of California’s safe and viable future. 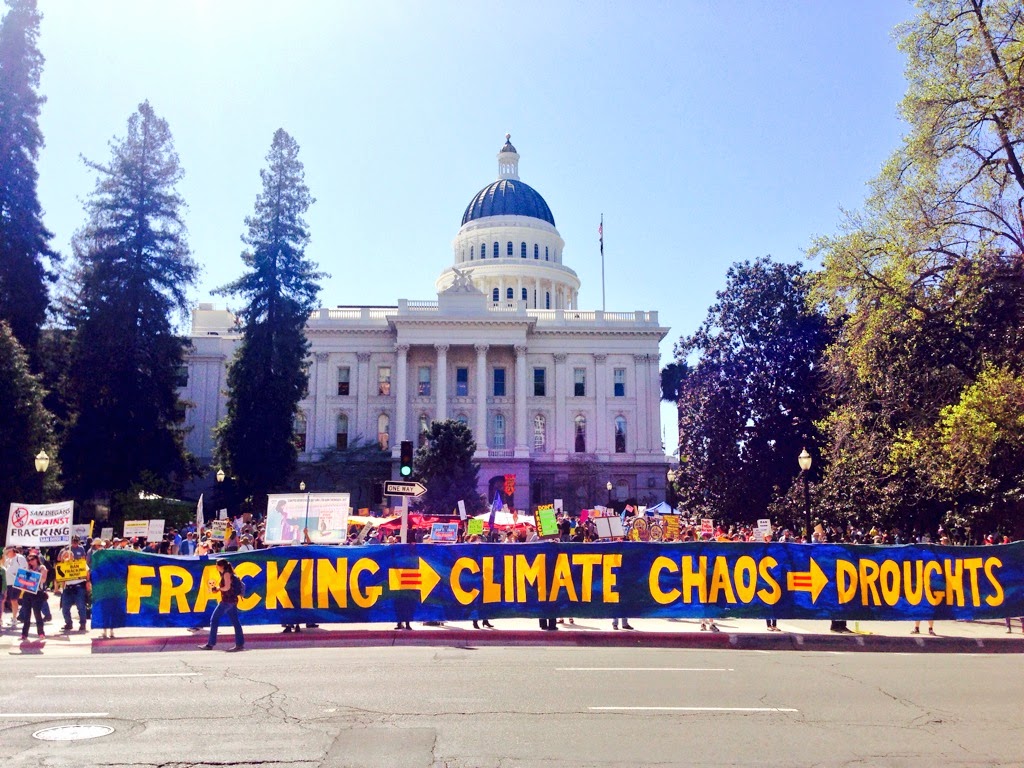 I have recently visited with your senior staff a couple of times and they appeared to be very interested in learning more about the alleged oil and gas failures in Colorado, our physical health observations living in the epicenter of fracking and the rumble of a fast growing movement to protect our ways of life and our pending future.  My initial comment to your staff has been: ‘We are smarter than a fossil fuel,’ and ‘no technology can make fracking safe.’

The movement is growing and is now centered on civil rights.  Our rights to safety have been stripped by the oil and gas industry's federal exemptions and state statutory laws. The people of America are rising up to prevent the oil and gas industry from destroying our lives and the planet. A global ‘call to action’ is taking place that fracking must be stopped. People will place their lives on the line to protect their children’s future, their clean water, clean air, clean lands and will sacrifice everything to ensure we re-gain our civil rights.

Will you also deny Californian's their civil rights to safety and forever be known as the man who didn't do what he could have done?

P.S. I am a native Californian.