One landowner's decision can place hundreds, if not thousands, of innocent people at risk from the dangers of the fracking industry's toxic air, groundwater contamination, fugitive emissions, failed equipment, human error, and even a blowout which is the most dangerous to communities that are close by.

A blowout is an accumulation of extreme gaseous and liquid pressure down in the ground that exceeds the prevention capacity at the top of the well-bore. Meaning: a pressurized explosion that can potentially travel miles upwards and outwards spewing toxic fracking chemicals and hydrocarbon based fluids for across the tops of homes and public areas.  If the blowout fluids ignite, that's a different story where mass devastation may occur. Remember Deep Water Horizon? You get the picture now.

So how does one man's decision to lease his minerals to the fracking industry legally violate homeowner's and public safety?

Simple. The federal exemptions the fracking industry lavish in, and statewide preemptions, (which are mostly arbitrary and capricious) allow the frackers carte blanche to develop and operate heavy industry operations that release harmful byproducts a mere 350' (sometimes closer) from homes in Colorado while not obligated to abide by key federal mandates that every other business must adhere to, or face getting fined.

It's a rogue industry that can legally poison people for profit.

The fracking industry had to find as many legal ways of getting rid of their harmful operational byproducts to increase their profitability and in doing so, they stripped the American public of their civil rights to safety.

How easy is it for the industry to create a massive pond 1,000' long and three feet deep full of chemical laced fracking industry liquid waste to evaporate from their backyard air into your backyard airspace? Simple. It's the least expensive method to get rid of their nasty chemicals, and it's legal. The sun does all of the work for them.

Dilution is the solution to pollution. And it keeps their financial bottom line looking great. Your lungs become the filter for their poisons. And don't even think about proving it - you can't. It's all by design.

In 2011 after sifting through a few hundred thousand oil and gas documents, I realized that the fracking industry had known for at least a decade that it was going to return to the oilfields they had worked in the 1980's and 90's.

I also realized that the industry had so many exemptions and state waivers that placed citizens in a very dangerous position. They could no longer protect their health, safety and welfare. It hit me - This is no longer an anti-fracking movement, it's a civil rights movement. The oil and gas industry had effectively stripped our rights to safety. 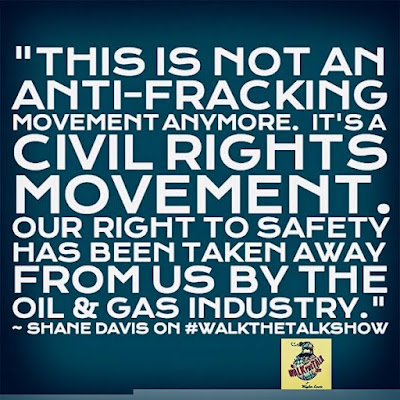 This time they were drilling deeper and telling people they will be using a new technology 'fracking' that will allow them to retrieve natural gas from the shale. The fracking industry even created false marketing by telling the American public that using and supporting this 'new fracking technology' we would ensure National Security and  that we'd have natural gas for one hundred years. What a load of shit that was. But people bought into it.

The industry knew they had numerous harmful byproduct chemicals from the drilling, fracking and extraction processes and had to find all the ways to get rid of them without having to pay a fee to do so.  It's all about making money. Who cares about human and environmental safety.

The late Dr. Colborn from The Endocrine Disruption Exchange www.TEDX.org discovered numerous harmful chemicals that are used in the drilling, fracking and re-completion stages of oil and gas extraction and studied them carefully to determine how they affected the human body, more specifically, the endocrine system. 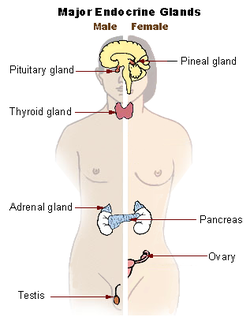 According to TEDX: "The endocrine system is involved in every stage of life, including conception, development in the womb and from birth throughout early life, puberty, adulthood and senescence. It does this through control of the other vital systems that orchestrate metabolism, immune function, reproduction, intelligence and behavior, etc."

How to humans ingest EDCs?  We can inhale these chemicals from a source nearby that release EDCs.  Possibly like a fracking well-pad.These types of chemicals are bio-accumulative and can build up in the body even at minute amounts over time and eventually mutate human DNA.

Are the fracking industry's exemption from the Clean Air Act which states a monster fracking pad, (like the one shown below) is exempt from being legally considered a 'major point source of pollution' and  therefore it is exempt from EPA rules and regulations?  Other oil and gas industry operational exemptions include: Resource Conservation Recovery Act, Safe Drinking Water Act, Clean Water Act, Emergency Planning and Community Right to Know Act, Comprehensive Environmental Response, Compensation, and Liability Act, National Environmental Policy Act.

Is toxic air trespass for the oil and gas industry to vent, flare, or release harmful chemicals near communities and our airspace legal? Yes, in most cases especially due to federal exemptions and state waivers which allow the industry to basically operate without interference. The federal and state exemptions are assuredly a civil rights violation on a epic scale that has been legalized and nobody is talking about it. You can no longer protect your health, safety and welfare.

The fracking industry's operational exemption violate our civil rights to safety. We can no longer protect ourselves from the fracking empire. They can legally poison communities and there is nothing we can do under the law.

The act of one landowner to agree to lease mineral and surface rights also indemnifies the oil and gas operator.

It is this sole decision of greed to lease private  mineral rights to the oil and gas industry that place hundreds if not thousands of people in direct harm from the fracking industry's operations, toxic byproduct exemptions, and the industry's operations errors.  Lest we forget, the Colorado Oil and Gas Conservation Commission's Director, Matt Lepore authorized your civil right violations as well. Doc Link

If you are a land/mineral owner, please do not subject the community to a rogue industry that can poison you for profit. It is unjust and uncivil.

We are smarter than a fossil fuel. We must ban toxic energy like fracking and create healthy energy that does not violate our civil rights to safety. Fracking is anti-progress towards healthy energy and democracy.

Extraction Oil & Gas, LLC (Extraction) designed the Johnson Trust 13-I Production Facility to be a safe distance from neighboring houses and buildings, clear of the 100 year flood plain and located efficiently for regular maintenance and access. Extraction agreed upon an oil and gas operations area per the landowner/ operator Surface Use Agreement pertaining to these horizontal wells.

Where possible, consolidation of existing facilities has been attempted to keep the disturbed area to a minimum. Extraction has reviewed the surrounding areas to identify any technical and economical options outside of buffer zones.

As a result of Operator's review of potential locations outside Buffer Zone, the operator has determined that this is the best possible location for the facilities given the surface owner's preference, property boundaries, utility easements and current COGCC setbacks