Thanks Encana Oil & Gas for the Abandoned Well Under our City Park! Courtesy Matters...

A stunning, but very common case of oil and gas courtesy brought to you by Encana Oil & Gas. In Erie, Colorado, a city park has a plugged and abandoned natural gas well under the surface where children play. Hundreds of homes surround the park where the abandoned well is located with some homes as close as 100 feet away.

The accuracy of this once producing natural gas well is supported with the official Colorado Oil & Gas Conservation Commission (COGCC) 'Application to Permit to Drill' in December 1981 with its precise location. This well was initially owned by Vessels Oil & Gas Company which later sold the lease to PanCanadian Energy (Encana Oil & Gas). API: 05-013-06106

What kind of gesture is it to cover up an abandoned natural gas well and build a playground on the land? How could the city approve of such a probable danger to the public at large, and the children who play on the property?

Click image to enlarge
(Note the dates of the images) 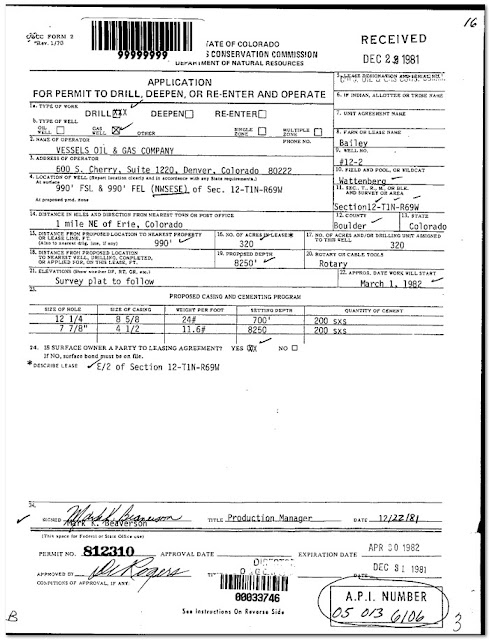 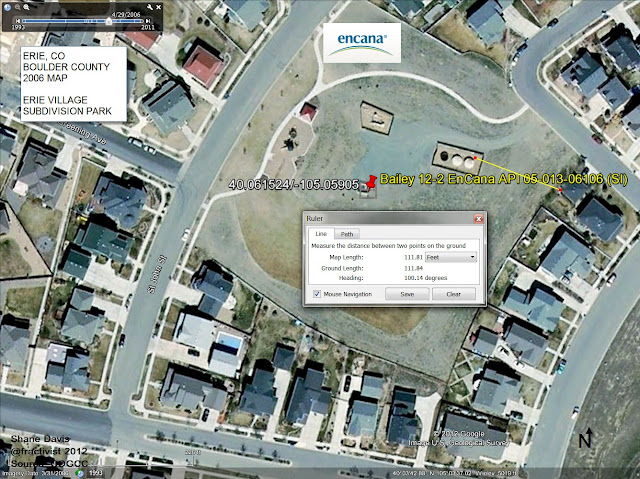 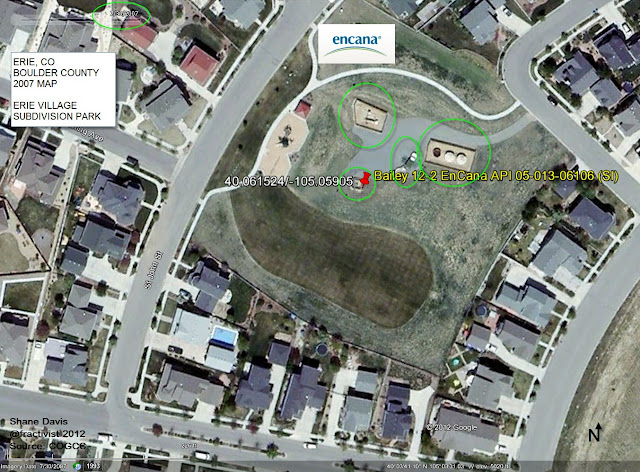 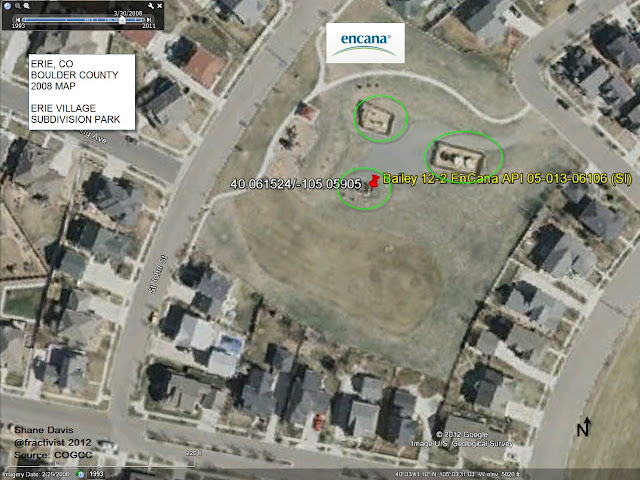 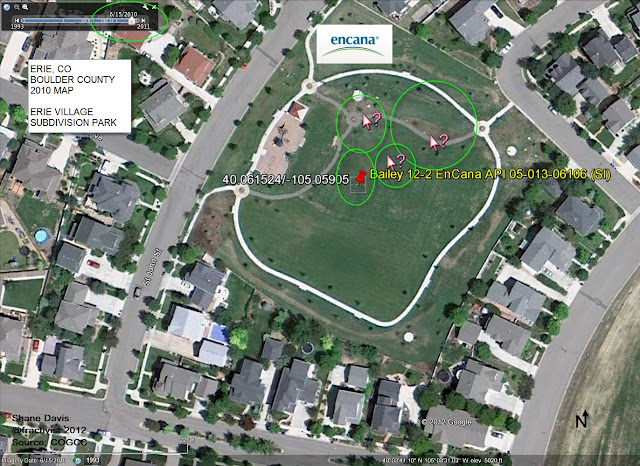 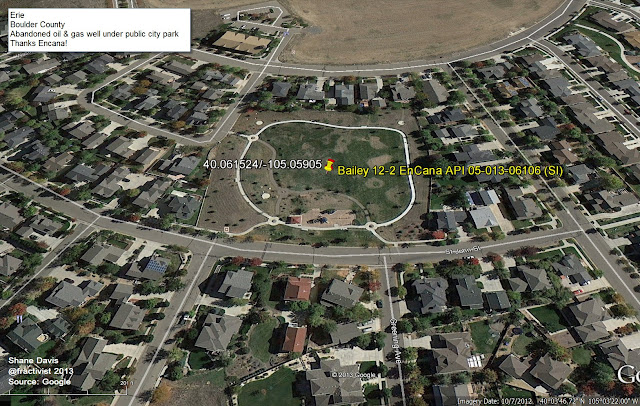 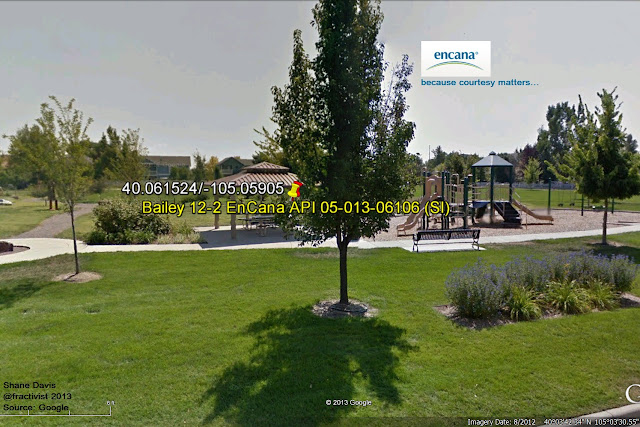 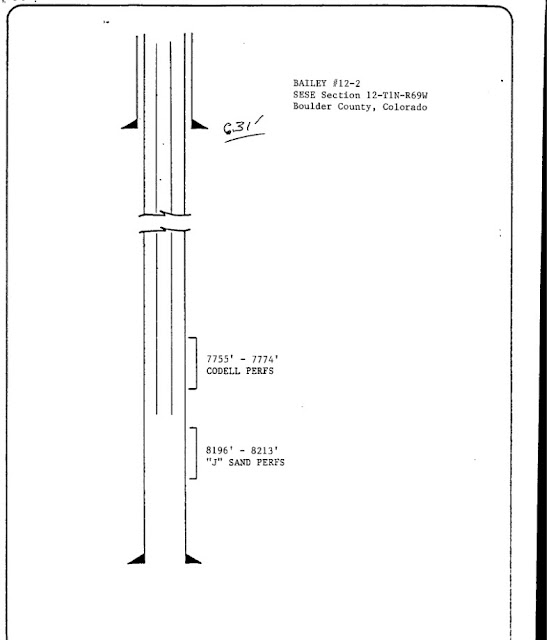 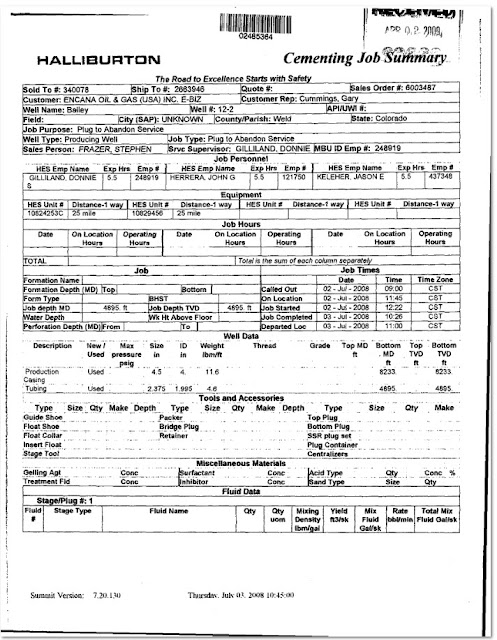 Abandoned oil & gas wells have historic problems and safety concerns as defined by the COGCC.  A recent case dated Jan 13, 2011 in Florence, Colorado an official report was filed by the COGCC to 'Request emergency funding for explosive levels of thermogenic, wet natural gas into and under occupied residential homes from plugged and abandoned wells.' ORDER NO. 1E-10

Below are snippets from the official COGCC Findings document. LINK

4.  COGCC Southern Colorado Field Inspection Supervisor Mike Leonard identified small circular areas of stressed vegetation in the late fall of 2010 in close proximity to oil well locations interpreted from the 1909 USGS records.  He also determined gas was actively seeping from one of the stressed vegetation areas.  He also determined that explosive levels of methane were present in the shallow soils immediately adjacent to one of the mobile homes in the area.

5.  COGCC Staff propose to investigate and determine the sources of gas seeping in this residential area.  The investigation will include detailed investigations of the gas seeps.  Trenching and excavating will be the primary method used to locate orphaned well bores.   Flux surveys of gas seepage volumes will be done simultaneously with trenching and excavating to better locate the sources of gas and the directions in which the gas is migrating.  Other tools that may be used are magnetometers, ground penetrating radar as well as handheld infrared or other gas leak detector devices.  Sampling and characterization of gases from seeps and oil wells in the area will also be used to better understand sources of the seeps.

6.  COGCC Staff also propose to aid the local residents to better ensure immediate safety in their homes by purchasing and installing gas monitoring devices as needed.  Other passive mitigation measures may also be used such as venting of combustible soil gases away from homes and residences.

7.   This project designed to ensure human health safety and welfare has estimated costs and expenditures of $67,000.   As described in Finding No. 1, funds for this project are not available from Appropriation 075 which is used for environmental response or from Appropriation 076 which is used for special environmental projects in this fiscal year.  COGCC staff believes that this project needs to be done as soon as practicable due to the potential risk to human safety posed by gas believed to be leaking from orphaned oil wells in the area. 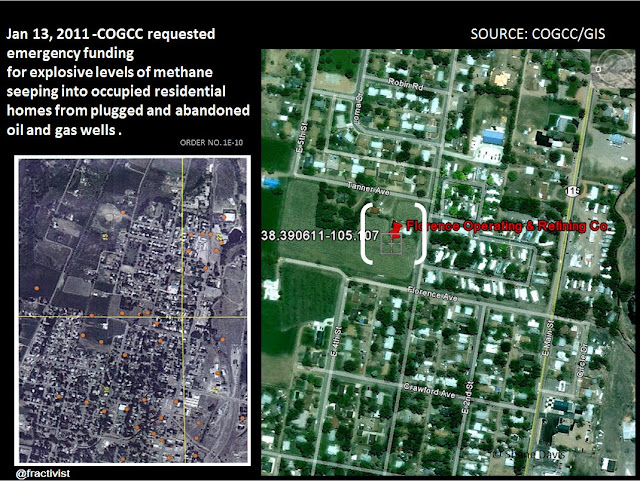 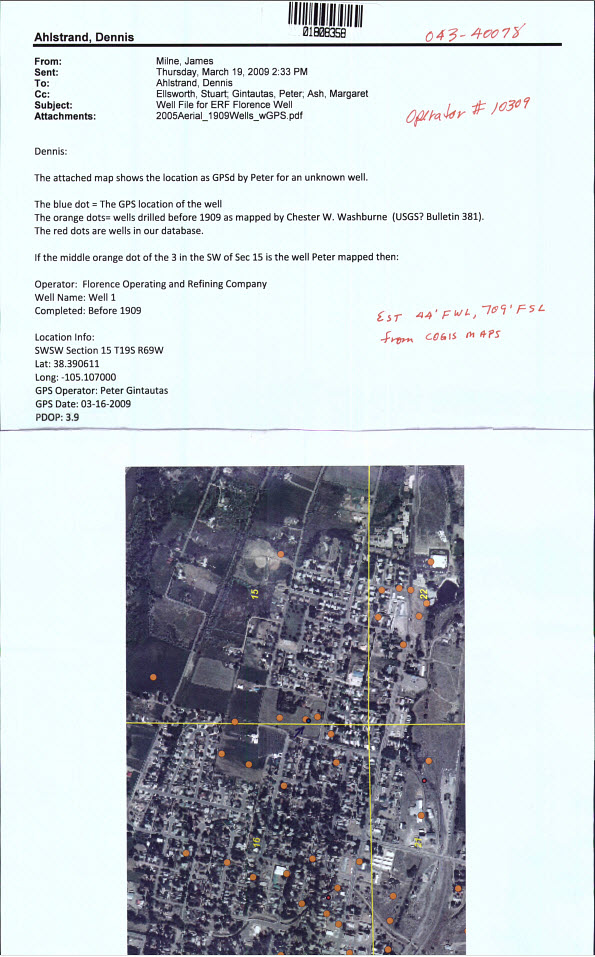 There are approximately 79,000 abandoned oil and gas wells in Colorado.  The question you need to ask yourself is: 'Do I have any abandoned wells near my home?'

All cement wellbores WILL fail over time. It's the nature of things.